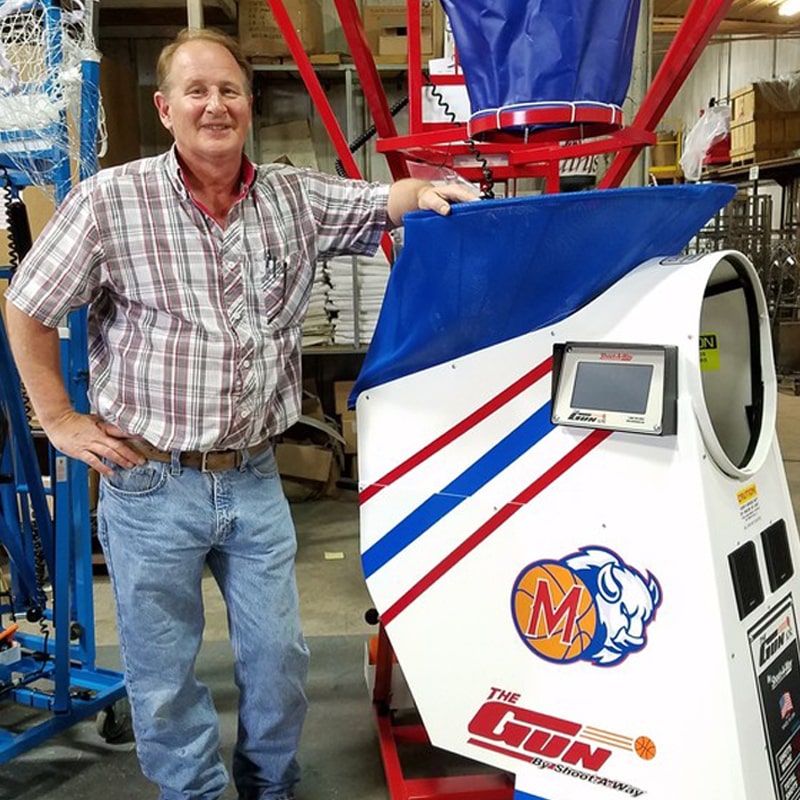 John is the owner of Shoot-A-Way and the inventor of the products that coaches all over the country are using to improve the skills of their basketball players on a daily basis. While in 8th grade, John went to a basketball camp at Ashland College where he saw a 1950’s film about Duke University using net systems to help return the basketball to shooters. Not only that, but the net systems actually helped shooters improve their shooting percentage by 10%. So, John told his camp coach that he was going to build one, and that is just what he did when he got home from camp. With pipe and wire, he went out and designed a system that would make him a better shooter and set it up in his neighborhood. People often laughed at the contraption, but it did the trick. While in college years later, he re-designed the system and offered it to coaches as a tool for improved shooting. Most coaches were skeptical, but in 1982, a successful coach in Pennsylvania purchased the first one as a resource for his players to get better faster. John knew that if one coach liked it, thousands more would also. Currently, over 10,000 Shoot-A-Ways have been sold across the country! But, that was just the tip of the iceberg. In 1998, John wanted to come up with a way for the ball to be passed back to shooters, and that was when the “Gun” was created. In 1999, the University of Florida was the first school to invest in one, and now over 17,000 “Guns” are being used by schools to help kids work harder and get better faster. And that is the goal of Shoot-A-Way! John says the greatest rewards are the letters and pictures from coaches and players thanking him for giving them a way to reach their goals and achieve success. That is what keeps his passion going for developing new products. The success of this company is only for the blessings of God, and we try to honor God in all that we do.

Call Now
Thanks for subscribing! Please check your email for next steps.